Worse Than Usual: Providers Weigh In on the DSP Staffing Crisis And What They’re Doing To Solve It

SETworks latest survey reveals how the conversation around the DSP staffing crisis is evolving more than a year into the pandemic.

Nationally, the turnover rate for DSPs is 43%. This means that on average, disability service agencies have to replace more than two out of five DSPs each year. In some states, more than three in five DSP positions must be filled every year because of employee churn.

High DSP turnover is not a new phenomenon. In 2004, Congress commissioned the Department of Health and Human Services (HHS) to conduct a study on the shortage of DSPs.

The survey found that the average turnover rate for all settings from 1998 to 2003 was 50% — just slightly higher than the national rate today.

This led us to wonder: How has the pandemic changed the conversation about the DSP staffing crisis? Have providers accepted that this is the ‘norm’ for the disability service industry? And what strategies or solutions might be useful in this extended crisis?

Rather than rely solely on our own experience and observation, we reached out to disability service providers throughout the country to understand the challenges they’re facing and their recommendations for dealing with the DSP staffing crisis. Below are some of our top takeaways:

Staff shortages have been worse than usual during the pandemic, but turnover differs considerably between agencies

Seventy percent of survey respondents said that the DSP staffing crisis has worsened since the onset of the pandemic.

The remaining agencies said there has either been no change, or that the need for staff has decreased.

While most agencies agreed that staff shortages have been worse than usual, some have experienced the crisis much more acutely.

Turnover — which accounts for only part of the staffing shortage — varied widely from one agency to the next. Some agencies saw DSP turnover rates of less than 10%, while others saw rates as high as 60% or more.

The pandemic has exacerbated chronic issues within the disability services industry, pushing many DSPs over the edge.

Low wages and a lack of benefits were the main factors causing turnover of direct support staff, according to our survey.

That’s no surprise given that inadequate compensation due to low service rates was a persistent problem even before COVID-19. The typical DSP earns just $12 an hour, or $24,394 a year for a full-time employee. To make matters worse, many DSPs were laid off or lost hours due to the pandemic.

Burnout has also contributed to the problem, as a year of changing job demands, child care duties at home, and heightened stress about contracting COVID-19 took a toll on DSPs mentally and physically.

That’s on top of the usual stressors that cause DSPs to leave the industry: exhausting work, unpredictable hours, challenging behaviors from clients, and a lack of acknowledgment for their contributions to the economy and society.

At the same time, providers said that stimulus checks and pandemic unemployment benefits have led some workers to seek out new career paths that offer better pay, more consistent work schedules, and opportunities to advance.

DSPs have carried a heavy burden during the pandemic, aggravating shortages and turnover in an industry already running low on employees.

But as pandemic unemployment benefits come to an end and vaccinations become more widely available, will that improve? Or will a stronger economy and more appealing job opportunities lure people away from the field? 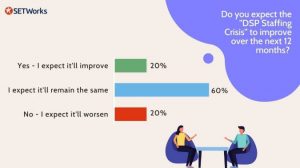 On the whole, providers expressed doubt that DSP shortages will improve as the pandemic eases. In fact, over half (60%) of respondents said that they expect the staffing crisis will remain the same over the next 12 months.

Another 20% of respondents were optimistic that things would get better, while the remaining 20% said they expected the situation to get worse.